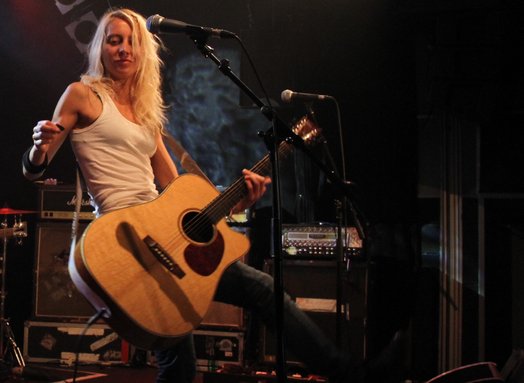 Monica and The Explosion

Monica and The Explosion's new and fifth studio album Go Out! is now out, released on Sep 1st 2021. more info about the release:  EPK.

Monica and The Explosion is Monica Welander, is an acoustic punk rock artist originally from Sweden. She has been touring all around the world, as a solo artist or with a band, known and respected for her dynamic live performances and her songs. The sound is best described as ”jukebox punk” - acoustic rock n'roll with attitude.

Monica and The Explosion started in 2005 when Monica left her old rock band to focus on writing and performing solo. Her music was described as punky rock with a lot of energy.

The debut album "Monica and The Explosion" was released in 2007 on her own label, backed by Per-Ola Risenberg on drums and David Persson on bass. The three of them played together in Sweden for a while before Monica went touring on her own. Two music videos are released from the debut album: "Hollywood" (2007), and "Friday Night"(2008), both produced by Daniel Larsson.

The release of her first album brought her out in the world. The following 3 years she toured around Europe, Australia, The US and India, ending up in the UK where she has been recording her last 4 albums, working with top British punk rock musicians.

Monica and The Explosion's new and fifth stuido album Go Out! is now out, released on Sep 1st 2021.

No Light Fanzine Aug 7 2021
Monica and The Explosion - Go out! (Album 2021):
"...On the album we encounter some really full on and wonderful punk rock which with some of the tracks also has some pop elements. Monica's voice sounds really good along with the fast punk rock. Imagine the feeling of packing the car with your mates, pull out onto the highway and head towards the horizon… The album is good right through, but two songs that stick a little extra are "Are you ready" and "Never grow up" which will be played on repeat many times!..."

Monica and The Explosion-Less Frenetic

"...The laid-back vibe of opener '9 in the Evening' instantly draws the listener in, the usual passionate nuances of Monica's distinctive voice both captivate and carry the acoustic strum. The fascinating fantasising tale of old friend 'Scottie' coming to the singer's mind following a park bench sleep, with its stop-start intro stands out amongst a satisfying selection of skillfully arranged personal reflective songs. Monica's angular audio offerings engage listeners as she exudes her singular attitude on these charismatic, slow burning songs.

Richard Wagenaar, The Next Gig

"This fourth studio album by the Swedish is a charming piece with great songs..."

Monica and the Explosion – Less Frenetic

"...The new acoustic album by Monica and the Explosion, albeit Monica Welander, is a real treat that demands your attention throughout and isn’t content as some background music at a dinner party like some solo projects..."

"..It feels obviously more naked than before and the eight songs show the bare sound admirably....Singer / Songwriter of course one can call it that, but this is something more and something better. I would probably like to write Monica in to the punk history..."

"...the high energy gutsy songstress sings her heart out for 13 memorable short, sharp songs. There is a rush of adrenaline that explodes from her frantic strumming and a vocal drawl full of feeling and power which plays off against some of her tounge-twisting lyrics, radiating attitude and defiance..."

"Monica Welander has some serious attitude but is cool as hell too. Armed with an acoustic guitar that she pounds the hell out of, this is acoustic punk at its most fiery and personal... Welander pulls off the Joan Jett, "I-don't-give-a-damn sort of sassiness without any hint of contrivance..."

"Shut Up!- Monica and The Explosion.

Female singers seem to be taking over the world right now, but if you want a break from the power ballads and quirky pop tracks, do not miss this feisty local musician. Strongly flavoured with classic British punk, Monica Welander - a Swede now based in Tunbridge Wells - is not so much a breath of fresh air, as a force-10 gale of honest, funny lyrics and insanely catchy tunes. She doesn't mince her words, with tracks like Intoxicated summing up Saturday night romance in blunt and witty style, while the opener Take it Or Leave Me has toes tapping from the very first bar. Any album that can put Culture Vulture in a good mood on Monday morning deserves the highest recommendation."

Monica and the Explosion – Shut Up!

"...Songs like “Take It Or Leave Me” and “Shut Up” are fiery musings with a little bit of Joan Jett attitude thrown in. The album might be a little rough at the edges but that only adds to it’s charm. Let it explode out of your stereo and enjoy!"

"...Shut up is a record that makes your legs wanna move to use that expression, with a voice that is close to Patti Smiths and sassy lyrics Monica Welander is a well needed energy injection in a sometimes too flat music scene."

Monica and The Explosion

In 2015 Monica wrote a blog about her 10 year careeer as an artist. the blog was published on the Facebook page. You can read the whole blog here.